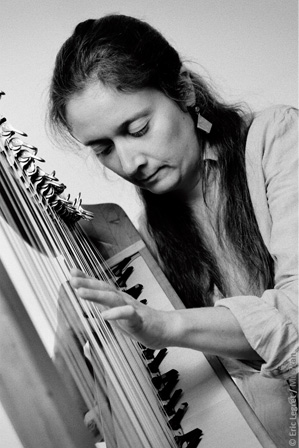 Hoëla Barbedette grew up in the centre of Brittany (France). At the age of seven she started learning the celtic harp with Anne Auffret. Bathing in a Breton musical and cultural environment, attending a lot of week-long courses with many harpists while also learning other Breton folk wind instruments, and finally starting to play on stage for concerts or festoù-noz (dance evenings), she gradually developed her own playing style on the harp, tonic and creative.

Hoëla belongs today to the new generation of harp players in Brittany. Among numerous and varied musical experiences, she recorded two albums in duo with the double-bass player Delphine Quenderff, one with the sixteen-musicians Breton band Norkst (the Kreiz Breizh Akademi project), where she uses a Starfish harp with quartertones levers, and also one with Bon Matin (a meeting of two harp players from France and a Flemish bagpipe player and an accordion player from Belgium).

Her two solo productions, the albums Cerisier and Roc’h an Burtul, offer the richness and variety of her playing and inspiration, as well as her work on modals scales, sound research, composition and improvisation. Hoëla is also keen of playing with singers,  as shows it her duo around breton modal songs with the singer Eric Menneteau (Their album, Amzer da goll – « Time to waste » – was released in July 2019) and her trio with the Turkish singer Canan Domurcakli.

Graduated as a state teacher of Breton Folk Music on the celtic harp, and working in a music school in Brittany, she loves sharing her passion during regular as well as occasional courses, giving workshops all around Europ.

She also published in 2010 a book of scores, accompanied with a disc, of folk music from Brittany arranged for the celtic harp, and she participated to 3 volumes of the Breton Harp Anthology published by Tristan Le Govic in 2015.